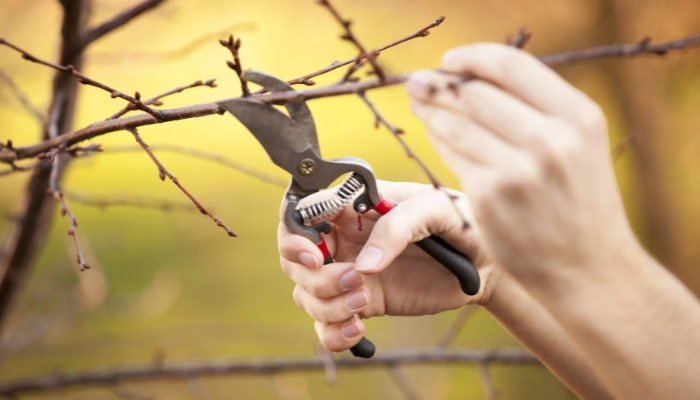 Growing your own fruit trees is an extremely rewarding practice, however, once your tree is growing for a couple of years, it’s time to start learning about pruning.

Should fruit trees be pruned?

Fruit trees require light to moderate pruning on an annual basis. Branches that grow straight up, straight down, are broken, dead, or otherwise crowd other branches should be removed. Pruning fruit tree branches is best done in the winter or summer.

Read on below and explore everything you need to know about pruning fruit trees, including why, when, and how to do it right!

The most significant benefits of pruning your fruit trees regularly include:

How Does Pruning Promote Fruit Growth?

The most important way that pruning promotes fruit growth is that it causes the buds which are currently dormant to become active and bloom during the next season.

Pruning fruit trees also helps the tree receive sunlight on all of its branches (not just the tops and sides. Further, pruning allows better airflow to the tree and its fruit.

How Old Should a Fruit Tree Be Before Pruning?

Most fruit trees don’t require major pruning for the first 3 to 5 years of their growth. However, it is crucial to lightly trim any damaged branches or areas of the tree that aren’t necessary.

That means during the first year or two, you shouldn’t need to prune heavily, just enough to remove stragglers and broken or dying branches so that the rest of the tree may thrive and produce a larger yield.

How Often Should Fruit Trees Be Pruned?

Fruit trees require a yearly pruning, either during the late winter time while the tree is in a dormant growth stage, or in the middle to late summer time once the new growth is approximately 5 inches or longer/taller.

Fruit trees should also be pruned throughout the year if branches become damaged or die. Further, any parts of the tree that become diseased should also be removed (regardless what time of the year it is).

How Do You Prune Fruit Trees for More Fruit?

When you remove dead and broken branches, as well as new growth that won’t produce fruit (but will block out light and airflow to the rest of the tree), you are ensuring that your tree produces as much fruit as possible.

What Is the Best Time To Prune a Fruit Tree?

The best time to prune any fruit tree is during the dead of winter, typically the tail end of it. Early spring is also a good time to do your fruit tree pruning without affecting its hardiness or health in general.

For light pruning, the removal of small new branches, pruning may also be done in July and August. That said, avoid heavy pruning during the summer as it may cause harm to your tree and slow its overall growth.

Pruning your fruit trees in summer is sometimes a necessary deed. That said, too much pruning in the summer may lead to stunted growth and less fruit production next year. The best approach for summer pruning of fruit trees is simply cutting off the year’s unneeded new growth, and removing dead and broken branches.

Autumn isn’t the best time for pruning fruit trees because they are recovering strength and energy (after producing fruit and dealing with summer heat) for the oncoming winter. Avoid pruning during the autumn altogether, except for broken or dead branches.

The late winter is by far the best time to prune fruit trees of any sort. That’s because in the winter trees are undergoing a dormant phase. That means you’re less likely to affect next year’s growth and fruit production if you prune them now (during the winter – while they are dormant).

Remove broken, dead, and diseased branches as well as stragglers that aren’t growing in the right direction.

Early spring is the second-best time of the year to do your fruit tree pruning, after the coldest winter months, but before the late spring growth spurt and early summer heat kick in. Spring is the best time to trim new growth around the base of the tree as well as broken, dead, and diseased parts of the tree.

How To Prune Fruit Trees

While pruning, always start cuts from the underside of the branch at a 45-degree angle, at least 2 to 3 inches from the base. This prevents tearing and splintering. Once the branch is scored, continue cutting through, leaving a clean-cut stub a few inches long.

The most important part about pruning young fruit trees is ensuring you don’t trim too soon or too much. All you’re doing at this point is getting rid of branches that grow in the wrong direction and make it look scraggly as well as anything that becomes broken, dead, or diseased.

Generally speaking, a bit of snipping here and there is all your young fruit trees need. It’s not until they’ve reached 3 to 5 years old that regular heavy pruning needs to start happening.

Should You Seal a Tree Branch After Cutting?

Tree sealer may be applied after pruning branches from trees, but it is much better to simply let the tree heal itself (as nature intended). Adding sealer to a fresh tree wound hurts the tree, in the long run, more than it temporarily helps it.

Pruning fruit trees is necessary if you want healthy trees that produce plenty of fruit. That said, there are several common mistakes to avoid while pruning that otherwise may have a detrimental impact on your trees.

Pruning fruit trees is necessary at least once per year, preferably in the late winter or early spring with a bit of light trimming during the summer after fresh growth shoots up several inches tall.

Proper pruning practices help your tree stay in top form, produce the most fruit possible, and look its best.