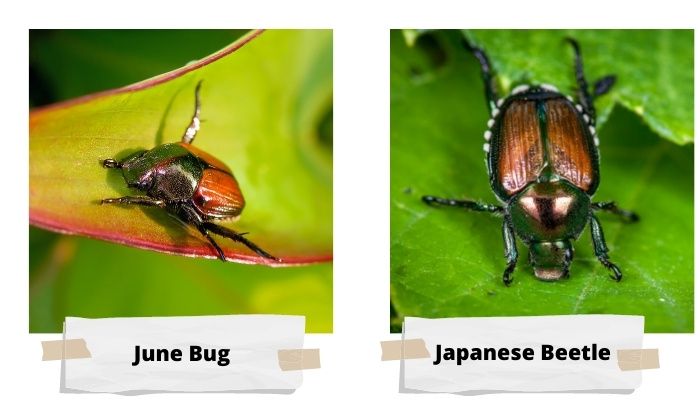 Read on for more information about the two insects, their diet, destructiveness, and means to control them.

Both the June bug and the Japanese beetle look alike. After all, the two species belong to the same family. However, each has several distinct features.

As the name implies, June bugs are those buzzing insects flying around us in the summer. They belong to the Scarabaeidae family of beetles and carry the scientific name Cotinis Nitida.

The June bug is the biggest summer beetle. Its length ranges from 0.5’’ to 1’’, which is almost double the length of the largest Japanese beetle. It also has a width of about 0.5’’, which makes it highly conspicuous.

The June bug is reddish-brown with shiny wings. It features a bulky stout body shape typical to most beetles.

June bugs typically emerge in the early spring all around the United States. They prefer the warm weather from April to June, and then they start to go away for the winter.

June bugs are nocturnal insects that are most active during the night. They’re usually attracted to the lights of houses and porches. They’d go closer until they crash into it.

What Do June Bugs Eat?

June bugs usually feed on foliage and different fruits, both ripe and rotten. They prefer apples, berries, grapes, and peaches.

Adult June bugs also eat the leaves of plants and pollen. They drink sweet fluids and sap from trees. On the other hand, the grubs feed on the roots of different types of plants.

June bugs mate in May or June. Females typically lay between 50 and 200 eggs, which take from two and a half to four weeks to hatch.

The larvae are called “white grubs” because of their color and can grow up to a whole inch long. They feature three different pairs of legs, starting right behind their heads.

June bugs are less damaging than Japanese beetles. They devour more grass and bushes than crops and flowers.

How To Get Rid of June Bugs

Getting rid of June bugs is easy and can be done with or without chemicals.

You can get rid of June bugs using BT, scientifically known as Bacillus thuringiensis subspecies kurstaki. This is a non-toxic organic compound that helps get rid of the larvae in the lawn.

Alternatively, you can spray dish soap and water on your lawn to suffocate the grubs. This prevents their presence as adults later.

You can also get rid of the June bug physically by installing bug traps to catch adults.

To make a trap, pour sweet fruit juice into a container with a wide funnel opening. The juice will attract adult bugs, where they’ll get trapped.

Alternatively, the bugs’ natural predators, including lizards, snakes, and frogs, can help control the presence of June bugs.

As the name implies, the Japanese beetles are natives of Japan. However, they have widely spread in the Eastern part of the United States.

Japanese beetles have a metallic green body and copper wings. They have hard covers on their wings that don’t reach the end of their abdomen. They also feature white tufts like hairs on each side.

Adult Japenese beetles are most active during the day when they swarm in groups of 20 to cause damage to your garden and crops.

They are commonly found between May and September before they start hiding to prepare for winter. Adult Japanese beetles only live for two months or so, so chances are, they’ll die before the following season.

What Do Japanese Beetles Eat?

Japanese beetles eat the roots and leaves of about 300 different types of plants. They also devour ornamental flowers and fruits, such as raspberry, blueberry, and blackberry.

Adult Japanese beetles begin mating in mid-July. Females typically lay between 40 and 60 eggs, which hatch after one or two weeks. The larvae feed on the decayed matter in the soil as well as the roots of the lawn.

Whether adults or grubs, Japanese beetles are major pests that cause severe damage to crops. They also devour flowers, fruits, and vegetables.

Adult Japanese beetles eat leaves, leaving only the veins intact. This may lead to the death of some crops, such as almonds, peaches, plums, beans, potatoes, and cherries.

How To Get Rid of Japanese Beetles

Getting rid of the Japanese beetles is not hard. You can do it physically or chemically.

You may resort to chemicals, such as Neem organic insecticide, which is quite effective in controlling adult Japanese beetles.

If you use pesticides, don’t use them regularly to avoid harming the roots. Some chemicals can be harmful to other living organisms and plants as well.

You can handpick these beetles as you see them on your crops or flowers. You can also create bug traps. However, this isn’t the best way since traps only catch about 75% of the bugs. If you go for this option, try to do it in early spring to catch the bugs before reproducing.

Interestingly, the smell of dead Japanese beetles can repel live ones. Feel free to leave those you handpick or catch in traps out to repel others.

You may also invite natural predators, such as birds and soil-dwelling nematodes, that naturally prey on Japanese beetles.

Are June Beetles and June Bugs the Same Thing?

Yes, they are the same. June Beetles, June Bugs, or May Beetles all refer to the same insect that appears in early spring through summer to feed on foliage and fruits.

There are several natural predators to Japanese beetles. Birds such as robins and cardinals can be the number one predators of these beetles. In addition, some mammals, including raccoons, skunks, shrews, and moles, can eat their grubs.

June bugs and Japanese beetles are two different species that belong to the same family. They emerge in the warmth of spring and summer to devour foliage, flowers, and crops.

June bugs are generally larger and darker in color. Although they lay more eggs, they cause less damage.

Getting rid of June bugs and Japanese species is easy. You can control both species by physical as well as chemical means.