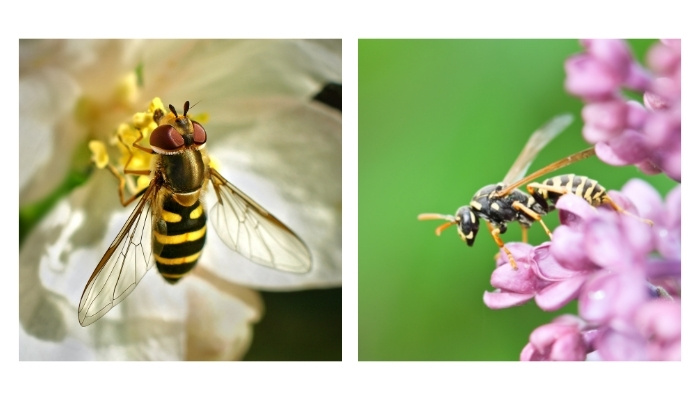 Wasps are nobody’s idea of a good bug in the garden or the outdoors in general. They are quite destructive, have a nasty sting, and tend to build their nests in the least likely places on your property.

Hoverflies look like wasps but couldn’t be any more different. They’re good bugs that help with pollination and feed on aphids among other pests in the garden.

A wasp is easy to identify with its four wings, long antennas, slim waist, and colors that range from red-orange to yellow and black. Wasps are omnivores feeding on meat, caterpillars, and fruits. They bounce up and down in the air and have a painful sting. A hoverfly, on the other hand only has two wings, short antennas, and a yellow and black compact body. It doesn’t sting and hovers in the air over the flowers where it feeds on pollen and nectar.

Although you only see these two when they’re airborne, you can tell the difference between wasps and hoverflies from the way they fly. Hoverflies hover and can stand still in the air while wasps are jittery and fly in sudden bounces.

Read more to find out the key differences between hoverflies and wasps.

Hoverflies vs. Wasps – How To Differentiate

Although to the casual observer, hoverflies and wasps look the same, there are major differences in their appearance, behavior, and even the way they build their nests.

While hoverflies are good bugs that you should welcome into your garden, wasps are predatory insects with aggressive behavior and you should keep your distance from them.

When you can’t tell if the bug flying in the air is a wasp or a hoverfly, the wings are a dead giveaway. Hoverflies only have one pair of wings which are broad and lightly tinted. When they land on a flower, the shapes fold into a V-shape. Wasps by contrast have two pairs of wings with the front pair larger than the back one. They help them bounce up and down as they fly.

The body of the hoverfly is compact with no defining features such as a distinct waist. This is different from a wasp that has a slim waist connecting its well-defined abdomen to its thorax.

Both wasps and hoverflies have antennas. But while the pair of antennas on the hoverfly is short and thick, wasps have long and thin antennas.

The difference in behavior between wasps and hoverflies is like the difference between night and day. Hoverflies have a mild temper and do not sting. In the larvae stage they feed on aphids, but once they mature, they feed solely on nectar and pollen.

But wasps are a different matter altogether. As omnivores insects that feed on everything from caterpillars to fruits and meat, they have an aggressive behavior and would not hesitate to use their sting on anything they perceive as dangerous including a human.

Wasps attack good insects such as bees and kill them for no apparent reason. They’re quite territorial and if they build a nest on your property, they’ll attack you if you get near it.

If their physical appearance isn’t enough to tell you whether you’re looking at a hoverfly or facing a predatory wasp, then pay attention to their flight patterns. As the name implies, hoverflies like to hover in the air as they look for the next flower to visit.

Their broad wings allow them to stand still in the air for long periods of time like a hummingbird.

Wasps have more energetic and unpredictable flight patterns. They bounce up and down in the air getting closer to their target and then flying away suddenly. You can never tell when or where a wasp is going to attack you since they don’t follow a beeline path to their target.

Wasps built their nests in trees, roofs, or deserted buildings. But they might also take a fancy to your attic and build a nest there. They live in large groups and are hard to intimidate or get rid of. Hoverflies live near their source of food. The larvae will be found near water bodies while the mature insects live near flowers. Rather than building their own nests, hoverflies would occupy old nests left behind by wasps or bumblebees.

Unless you look closely and count their wings or observe their flight patterns, it’s easy to mistake hoverflies for wasps and vice versa. For other flying insects, especially pollinators that compete with hoverflies over nectar and pollen, the resemblance is uncanny.

This resemblance to wasps gives the hoverflies an advantage and more access to nectar-rich flowers without being disturbed by bees and butterflies.

Hoverflies are mild-tempered insects that feed on nectar and pollen just like bees and butterflies. They don’t sting so they pose no risk to other insects or humans in the vicinity. If anything hoverflies are beneficial insects since as larvae they feed on aphids.

Are Wasps Good for Anything?

Wasps are not pure evil. They still have some benefits. For example, they hunt other insects such as crickets, caterpillars, and flies among other pests. When wasps enter an area, most other insects would clear that area in a hurry.

Can Wasps See in the Dark?

The kidney-shaped eyes of the wasp are not good in the dark. Wasps cannot see in the dark or dim light so they only get active during the daytime and spend the night in their nests.

What Temperature Do Wasps Stop Flying?

Wasps are not cold-hardy insects. If the temperature drop below 50 degrees Fahrenheit, the wasps will have difficulty staying airborne.

Hoverflies have compact black and yellow bodies with just two wings. Wasps have four wings with a slim waist and a pronounced abdomen. While the hoverflies hover or stand still in the air, the wasps bounce up and down as they fly.

Hoverflies feed on nectar and pollen and don’t sting. Wasps feed on other insects, fruits, and even meat.