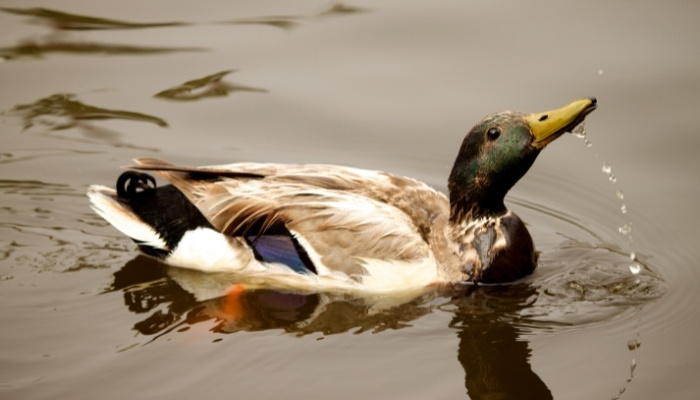 Ducks are one of the most friendly types of birds out there. Further, they make a smart addition to many farms and homesteads… but, what exactly do they eat?

Do ducks eat fish? Ducks that live near lakes, rivers, and streams eat fish and consume other aquatic food sources as part of their natural diet, while ducks that don’t live near water eat grains, seeds, and grasses. Most ducks will also eat algae, worms, slugs, fish eggs, and mollusks.

Read one below and learn all about how to keep your ducks well fed and avoid giving them harmful food!

Ducks are omnivorous birds that aren’t exactly known for being picky about their food. Wild ducks eat a much wider range of things, ranging from fish and their eggs to worms, snails, insects, grasses, seeds, and grains.

Ducks practically eat anything they can fit into their mouths, minus dirt and rocks. The proof is visible at duck ponds and nature reserves around the world where people feed them bread and crackers, two food sources that shouldn’t be given to ducks.

In the following sections, we break down the diet of ducks, both wild and farm-raised:

What Do Wild Ducks Eat?

What Do Farm Ducks Eat?

Crack corn, wheat, barley, oats, rice, and birdseed are among the most popular types of feed for farm ducks. That said, they’ll also eat insects, fish, and amphibious creatures if your farm has a waterway on it.

What Do Ducks Eat in a Pond?

While fish eggs are not as filling as actual fish are, ducks aren’t likely to pass them up when they have the chance to gobble some up. In fact, ducks that reside on ponds and other waterways with lots of fish develop a particular taste for fish eggs and often go out of their way to hunt for them and eat them.

Will Ducks Hurt the Fish Population?

Ducks’ main dietary staple is fresh fish when they have the choice. They prefer small fish over any other type of food source, as well as their eggs. That means as little as 3 or 4 ducks can wipe out the fish population of a small pond in no time (including koi fish/ponds).

Ducks indeed do eat grass, though it isn’t typically their first choice off of nature’s lunch menu. Grasses are fine for duck cuisine, however, it doesn’t contain much nutritional value. So, if you plan to feed your ducks with grass, consider providing them some sort of seeds, grains, or even insects (like crickets), to add more vitamins, minerals, and protein.

What Is Safe To Feed Ducks?

Ducks aren’t always so picky about what they eat, they’ll gobble up just about anything you put in front of them. A few of the safest and most common things to feed your ducks include:

What Not To Feed Ducks

It’s crucial to understand what types of food can be dangerous for your ducks, otherwise, you can cause them to become sick or even die. Some of the most harmful foods that you should avoid feeding to ducks are:

Are Ducks Good for a Pond?

Unfortunately, ducks aren’t exactly good for ponds. Unless the pond is rather large, and there are very few ducks, they cause more damage than they do good. Ducks exhaust fish populations by eating the small fish and the eggs. They also damage the edges of the pond, causing erosion along the banks (where they dig into the ground to search for grubs, snails, frogs, and other food sources).

Ducks are known for eating frogs when they live in areas with an abundance of amphibious life, otherwise, they don’t go out of their way to look for frogs or toads. That said, once a duck population has begun to consume frogs, they often develop a taste for them and do indeed go hunting for them.

Ducks enjoy eating snails and hunt for them often. On your farm, a flock of ducks (15 to 30 birds) is capable of controlling the snail population or even eliminating it entirely. Once snails aren’t so readily available for eating anymore, ducks leave them be and begin munching on something else.

Ducks have no issue eating chicken feed, they gobble it up just like regular duck feed. However, while it isn’t harmful to them in any way, it isn’t very nutritious for them (other than being high in protein). For young ducks, chicken feed isn’t heavy enough in vitamins and minerals for them to develop properly.

Geese live in and near water, even more so than ducks, and can and do eat fish sometimes. But, they do not actually prefer eating fish or dining on other aquatic food sources for that matter. Rather, geese like to eat grasses and plants more than anything else. On farms, geese enjoy eating oats, corn, nuts, and other chopped greens.

Ducks, unlike geese, love eating fish. In fact, small fish and fish eggs are among the most common food sources they rely on out in nature. On farms, and in nature that lacks waterways, ducks, however, adapt to mainly vegan diets of grass, seeds, grains, veggies, insects, and just about anything they can fit in the beak and swallow.